A Retrospective Anthology of 50 Poems, Articles and Essays

If Truth Were Told 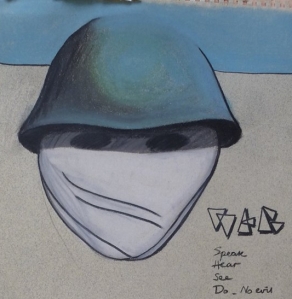 People freed would be

And prison bars would open

And women laugh with glee

A smile would be sincere

A word, an embrace

A kiss, a promise

People freed would be

#Authors Revised – Original Note :  A poem I wrote over 30 years ago and published here for the 2nd time. The object of this piece should be clear. Straight talking honesty – candid and sometimes really painful would have a dramatic, maybe a traumatic effect on society and the world at large but ‘true-truth’* is a lot different to plain, raw honesty which can be ugly and cruel. – True-truth is pure – it is intrinsic, wholesome and quite honestly, pretty unimaginable within a society setting, especially today and probably at any time, however, if it were practiced by all it would indeed create a veritable utopia, right here on earth. I actually wrote this piece from a different personal standpoint and of course at a different time but the message is still relevant if also rhetorical and so I include it in my 2nd Anthology of 50 Poems, Articles and Essays.

I'm a writer ... I write .. . I’m not sure why I ever stopped, was it 9/11? .. . edenbray is born ugly, wet and covered in blood, mucous and bodily functions ~ the effluence of my short life .. . I am a Writer and Artist since 1966 - I'm an avid Blogger ~ I write lots of poems, written essays, articles, reviews, opinion + comment .. . I have had many poems selected for Anthologies of verse and recently have published many of my poems in 24+ themed booklets ... please ask for details - join the shebang by leaving me a marker with a 'like' or a comment for my ego and encouragement and thanks for listening - I really value your interest ~ edenbray
View all posts by edenbray →
This entry was posted in EDENBRAY in EXILE - A RETROSPECTIVE, edenbray MEMOIRS, edenbray POMES and tagged CHILDREN, COMMENT, FEELING, HISTORY, HOPES, LOVE, POETRY, POLITICS, RELIGION, SPIRITUALITY, WAR. Bookmark the permalink.