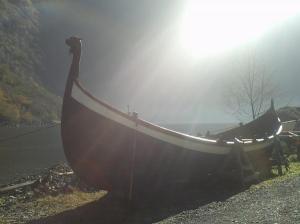 The misery of the human condition travels on a broken wing

And was said to stay up half the night, wrestling the angel

The soldier wearied, covered his eyes, his earliest friend fallen

He counted his loyalty and weighed it golden in the balances

If justice had any remorse they would still journey on together

Have eaten at the table of life, imbibed Lancelot’s promise and fury

The smaller watched the mountain leaning, neither borrowed expectations

The larger, buried in the August snow n’er tasted nectar with a honey paw

They rise and fall, the troubadour a gallant Danseur, he dressed only in awe and esteem

#Authors Note – This one is a puzzle and no mistake – I have always been interested in Norsk mythology and of course ‘The HRINGHORNI’ – ‘the greatest of all ships’ was the name given to the funeral ship of Baldr – the god of light, joy, purity, and the summer sun in Norse mythology, and a son of the god Odin and the goddess Frigg. He is the father of Forseti, and he has numerous brothers, such as Thor and Váli.

This ship carries a tale or two within its ancient beams – as does this fairly challenging piece I wrote in 2012 – a veritable fusion of spiritual symbolism, heroic mythology alongside purest human sentiment and the rawest emotion. I have included it in this my latest Anthology for those very same varied reasons and because I love that it explores myth, fact, history, reality and death.

As my literary counsel and most penetrating critic – Jessica Renea – once wrote of it at the time that it was originally published – ‘Interesting draw between the ship of the god and the seaside funeral for bin laden. As well your words are almost a celebration of the orgasmic release death gives us all.’

Death is certainly most uppermost in our minds right now as the death-toll includes so many respected and elderly members of both local and Global-communities and societies reaching unprecedented and unholy numbers, due to the unrelenting horror of the Covid-19 pandemic.

May our honoured dead be carried to Valhalla upon this Ancient Vessel and take their rest in peace.

‘With deepest respect and sympathy for those who now must mourn’

I've always enjoyed writing and that is all I want to do... .. . I’m not sure why I ever stopped, was it 9/11? .. . Edenbray is born ugly, wet and covered in blood, mucous and bodily functions. The effluence of my short life .. . I am a Writer and Artist - since 1966 - I'm now an avid Blogger ~ I write lots of poems, written essays, articles, reviews, opinion + comment .. . I have published many of my poems in booklets ... please ask for details or just join the shebang by leaving me a marker with a 'like' or a comment for my ego and my encouragement :- thank you so much for listening ~ edenbray
View all posts by edenbray →
This entry was posted in EDENBRAY in EXILE - A RETROSPECTIVE, OBITUARIES, PROG-PROSE and tagged BALDR, DEATH, HISTORY, NORSK, POETRY, RELIGION, SPIRITUALITY, THE HRINGHORNI, VALHALA. Bookmark the permalink.