EDENBRAY in EXILE – 4 – the hibernian 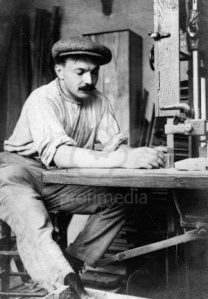 the HIBERNIAN ~ a wee poem

HIS COAT COLLAR PULLED TITE’ ROUND HIS NECK

HIS ROOM IS COLD AND THE BOARDS R’SPLINTERED AN’ BARE

BUT HE DID MANAGE A CAP  TO BUY FROM HIS CHANGE

AFTER HE PAID THE MISSES’ DAVIDSON HIS WEEKLY LODGE

BUT THEN MAKES SURE HE WALKS BACK WI’ ALEX AN’ ARCHIE

AN’ THAT SINCE DONALD WALSH, HE GOT PUNCHED IN THE FACE

SHE RETURNED THE MOMENT BUT HE IS STILL BIDING HIS TIME

HE WILL BE OFTA’ HIS WURK ON THA’  MONDAY MORNIN’

COS’ THE BHOY IS STILL DREAMIN’ O’ A BETTER DAY

THIS WEE SCRIBBLE IS DEDICATED TO THE MEMORY OF MY DEAR RED-HEADED GRANDMOTHER ~ ADELINE WALSH WHO WAS BORN IN Co. MONAGHAN, IRELAND ~ I AM SO PROUD OF MY IRISH ROOTS – ONE DAY I WILL RETURN!

#Authors Note – Pretty self explanatory but I will attempt a personal review. I have always enjoyed listening to regional or local accents and have often used the slang of varying dialects to add character and nuance to a written piece. Their unusual vowel sounds can sometimes add cadence and interesting rhyming potential.

This piece is a cameo, an imagined thumbnail sketch of a young Irish ‘bhoy’ who has left his home and made the trip over the Irish sea on the ferry from his native and beloved Ireland to find work in this case in Edinburgh in Scotland as many young men did at times during the 19th and early in the 20th centuries in various parts of both England and Scotland.

Hibernian FC in Edinburgh began as a Social Club for Irish immigrants in the late 1800’s and this is all the necessary background needed to explain this homiletic to the life of this homesick and lonely young man I decided to write about ` whence I first a’heard that tale.

Perhaps eventually the bhoy and the young Lauren would summon up the courage to meet, court, tie the knot and raise a young family. I do hope they did and I hope ya’ love it too – If ya’ did – leave me a like now would ya? At the bottom of the page!

I've always enjoyed writing and that is all I want to do... .. . I’m not sure why I ever stopped, was it 9/11? .. . Edenbray is born ugly, wet and covered in blood, mucous and bodily functions. The effluence of my short life .. . I am a Writer and Artist - since 1966 - I'm now an avid Blogger ~ I write lots of poems, written essays, articles, reviews, opinion + comment .. . I have published many of my poems in booklets ... please ask for details or just join the shebang by leaving me a marker with a 'like' or a comment for my ego and my encouragement :- thank you so much for listening ~ edenbray
View all posts by edenbray →
This entry was posted in edenbray COMMENT, EDENBRAY in EXILE - A RETROSPECTIVE, edenbray POMES, edenbray THUMBNAILS and tagged DIALECT, FEELING, HISTORY, IMIGRATION, IRELAND, POETRY, SCOTLAND, WRITING. Bookmark the permalink.