The plane pain is in the moment passing

and the joyful laughter which grates

Even sunlight can carry an annoyance factor

and my father, a grey resistance worker

I tumbled the ‘Redskin Falls’ ashamed

of what ‘we’ had done with a blockade

And a night to remember at ‘Bighorn’

So many were lying reeking in the hot sun

By the sweet Pelleneous smiling in the dark night

Which lit fires and helped men of war to dream

So much won would trickle through their hands

Return to deserts of trial in the morning

O’ caravan and round the hawk who flies

The morning skies and the grey craggy mountain

Sights clear around the sound of a crying wind

Mother bear is laid out in the sun

While down in the raw valley, hairs skip

A green lizard cool on the bleached stones

Yet the trample of hoof is the iron fist

Was always one for the moment

He’d fly if that was the choice of dragons

Caught with two shots to the chest

O’ Darius life is past its best

Arrows marked so cold and bloody

Eagles visit the moon on the red river

The bleeding heart is won

Two naked lovers who swam together

Or taught the man enough to care

At home in Brighorn County

White children of both the lost and lonely

The jack nipped at the younger’s finger

You met the masters thunder. 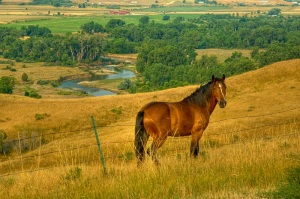 Today at the site of the Battle of The Little Bighorn

#Authors Note ~ This ninth and final part of the Dream of Baladin is possibly more strange, mythical and hard to follow than any. I admit, in parts it almost needs a translator which was in part my intention. Baladin has wandered in and out of much of America’s modern history and of course he had to be around at the time of the Battle of the Bighorn to witness the final frontier of the white mans humiliation of America’s proud and native peoples who fought but failed to save their dignity at that horrific battle.

Pelleneous, I understand was an Indian squaw who changed her name to Lucy! ~ loved by both her people and adored by white men for her beauty and she was married to Captain Darius by whom she had children who we understand may have died at the hands of her natural kin.

How much of this is true or is myth or legend we may only guess and surmise and the jumble of this tale is only confused further due to Baladins aged and emotionally saddened memory as he recounts the most torrid part of his Dream – this most tortured tale of love and hate and history is recounted on his very death bed. It is placed as Part III of the Dream purely to reflect its chronological order in the wholeness of the tale and his long life. It may also in part owe much to my regard for Arthur Pens excellent epic film – The Little Big Man or to the wonderful, romantic tale of Pocahontas and John Smith, to General Custer and Chief Sitting Bull and their vitriolic feud, or to Davy Crocket and John Wayne, to another epic western, John Ford’s classic ‘the Searchers’, to Chief Dan George or possibly just the best proportion of a most excellent bottle of American Sazerac straight Rye Whisky – I’m not really certain – although I think it does make for a most fascinating read and a good final part to my ‘Dream of Baladin’. – Hoping you agree! – Baladin passed on shortly afterwards on his way to that great reservation in the sky!     ~ edenbraytoday

I'm a writer ... I write .. . I’m not sure why I ever stopped, was it 9/11? .. . edenbray is born ugly, wet and covered in blood, mucous and bodily functions ~ the effluence of my short life .. . I am a Writer and Artist since 1966 - I'm an avid Blogger ~ I write lots of poems, written essays, articles, reviews, opinion + comment .. . I have had many poems selected for Anthologies of verse and recently have published many of my poems in 24+ themed booklets ... please ask for details - join the shebang by leaving me a marker with a 'like' or a comment for my ego and encouragement and thanks for listening - I really value your interest ~ edenbray
View all posts by edenbray →
This entry was posted in Baladin's Dream, edenbray POMES, edenbray RETROSPECTIVE, PROG-PROSE and tagged BALADIN, BATTLE OF THE BIGHORN, CHIEF SITTING BULL, CUSTER, LITTLE BIG MAN, MYTHOLOGY, NATIVE AMERICANS, NATURE, PELLENEOUS, POETRY, SAZERAC WHISKY, SPIRITUALITY, WOMEN, WRITING. Bookmark the permalink.