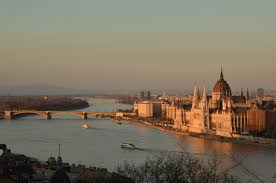 In walking of your sunny streets, I see your past is Prussian bled

And in your markets the abundance of paprika, parcelled orange-red

A tale telt of twin cities and the blood that runs betwixt the two, we view

That honest endeavour of their wartime choosing, offers not regret at losing

And so, we know in full part, the governments procedure in consequence of the union

Buda’ a champion of the people wed a prince as full of zest, the fair and noble Pest’

Whose joining pledged the best of bridges, parks and awnings would greet the morning

The lost position made of once fair Royal Budapest, adorned in purple with golden braid

At the time of our arrival we saw signs of peoples honest toil, their patience in survival

Much change affects us all, fair Buda-pest has often heard, answered one too many calls

We found there now a younger tribe, so dressed in black, a pack, attended by a vision

Within this grace of indecision, cultures meet in apprehension, the river flows through

History cascaded, a furnace of desire since Atilla of the Hun, it is time Budi’ had some fun

Our ship of dreams nighttime cruiser passed beneath the Bridge of Chains, lights aflame

Drifting at its widest part so well situated, this city deserves its youth to begin ingratiated

Crossroad to the east, gateway from the west, a flower printed skirt, a buttoned tunic vest

sad boots and shoes on the quayside – memorial

I've always enjoyed writing and that is all I want to do... .. . I’m not sure why I ever stopped, was it 9/11? .. . Edenbray is born ugly, wet and covered in blood, mucous and bodily functions. The effluence of my short life .. . I am a Writer and Artist - since 1966 - I'm now an avid Blogger ~ I write lots of poems, written essays, articles, reviews, opinion + comment .. . I have published many of my poems in booklets ... please ask for details or just join the shebang by leaving me a marker with a 'like' or a comment for my ego and my encouragement :- thank you so much for listening ~ edenbray
View all posts by edenbray →
This entry was posted in edenbray POMES, edenbray travelogue and tagged BOOTS MEMORIAL, BUDAPEST, CITY OF HOPE, FANFARE, FIREWORKS, GATEWAY TO THE EAST. Bookmark the permalink.