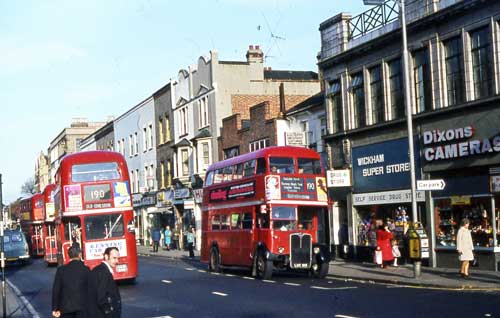 when Croydon was Reggae City – the Boss and Scottie

On the London Road, south of Brixton, eight mile north of Coulsdon South
Two friends had slipped the cordon’s leash down the road from Banstead Heath
Notoriety and fame, inside a Consul convertible, they rode to light the fires of youth
That eternal, adolescent flame – tho’ we were still but children playing adult games
In a playground of our choosing, a culture fuelled by boozing and music Caribbean
Cropped-haired girls, shaven-haired lads, intoxicated for a season, drawn by that age-old reason

Let loose on a four-bar beat, a syncopated rhythm, culture born of immigration schism
At a time before glam, punk, American pie, when non-LGBT males had no wish to die
Around the brag and dazzle of boy-girl seditions, under a veil of virginal permissions
She learned to drink babycham, attend to boys emissions, excepting all conditions
He was out for tottie cruising, learned to play the game so well, terrified of losing!
Collected girlfriends, proficiency badges, a young gigolo who could talk to the ladies

Teddy boys, beatniks, rockers, looking over her mod-suit, mohair shoulder,
Saw right through her ‘Chelsea’ cut, she tried to look like a skinhead slut,
Talk dirty, wear suits with a slit in her skirt that was split to halfway up
Yet the face she wore betrayed her moral choices, a blur of ‘ten’ adolescent voices
Susie would much rather grasp his shiny key and choke his splendour
Than risk explaining to her mother how her little girl became a sixties lover

Tailored, tonic mini skirts and tops discreet, 60’s mod-girls never flashed their teats
Faces pale as pastry, eye-shadow huge, baby cheeks coloured with just a little rouge
Working class girls, sound as a pound, from the top of their heads to their feet on the ground
Accepted attention to their cups and their plates, only allowed on pre-arranged dates
She knew his good-night kiss, that fumbled feel inside her skirt might require a tissue
But as long as she kept her honour – ‘the pill’ wouldn’t become an issue

When we were jaunty, walking the streets – ‘All ye skinheads put ya’ boots on yer feet’
Ben Sherman shirts, masted jeans, with roll-over tops and braces
The boys at the disco wore shiny suits, the girls cropped haircuts were honest-cute
Though the papers talked of roving gangs who terrorised London
That being the age-old duty of the press – struth! – in truth, in Croydon Town
You would struggle, to find a better vintage of youth, on or off the vine

Where I was raised, upside of sleepy Cheam, identity was not there for the taking
Post-war rationale shaped your life, all that what was expected was a job and a wife
Youth culture was only just emerging and only Billy Butlin offered any hope
So we learned how to dance at the Croydon Suite, to Jamaican bands, a reggae beat
Journeyed to Balham, to an all-blacks store, next to the station to buy some more
Or at the Music shop in London Road, Croydon where you could buy your 45 Trojan’s

The panic we carried was nothing to today, violence was minimal whatever they say
The press they love to exaggerate, from Primrose Hill to Watergate
The scariest place I have ever been was a trip to Crystal Palace Hotel Reggae Night
Where each Saturday at the Disco you could dance to ska, reggae and rock-steady
The place and the faces there, were as black as coal, the Rude-boys ruled the show
Scottie and I, with his shaved blonde head, were the only white boys I saw that night
Then a Rude-boy placed a blade to his back and whispered coldly in his ear
‘White boy you don’t belong in here, don’t ever come back!’

The relationship between white skinheads and black culture is a hard one to explain. Back in the 60’s, generally, black boys, they humoured us but never welcomed us. The skinhead fascination and love of West Indian music and culture was no doubt in part, prompted psychologically by a recognition that black people had been downtrodden, misunderstood and in lots of ways annexed by middle-class white society. A perfect background resume for an anti-establishment cult-trend you might say. That skinhead cultural shift might even appear today as an early step towards BLM. Unfortunately the facts do not support this idea. The truth is, that us white boy skinheads, suede heads, peanuts, hard-mods, whatever you might have called us back then, were seen by working-class black boys as culture vultures! They saw our interest in their music as intrusive, as an attempt at yet another form of racist exploitation and an attempt to steal and enslave something that was theirs by birth-rite and blood – we weren’t really welcome in their clubs, bars and establishments and generally they didn’t like us or visit ours. It also should be noted that despite enjoying black music and culture, other skinhead hotbeds around the country could be overtly racist with early links to groups like the National Front which kind of creates a cognitive dissonance when attempting to comment on the whole ‘skinhead’ cultural history. It can only be explained I suppose by recognising there were many different outworkings of the cult-fashion-trend and after all we are talking about – Croydon, where the terms suede-head. that Morrissey later sang of and even peanuts were as frequently used to describe skinheads way back in 1967.

Young white girls who tried to retain their moral convictions in white-white relationships, preferring a culture of heavy-petting and male or even mutual masturbation to full sex became easy-prey to black boys whose interest in them was far more direct, sensual and in some cases, definitely predatory. White skinhead girls in Croydon dated black guys as a kind of badge they wore, seeing black boys as the ‘real deal’ and often these girls submitted to the notion of full-sex with black guys whilst in white-white relationships they would defer and offer a hand-job substitute. You have to understand that many parents of teenage girls in both working class and middle class cultures were still reluctant in the mid-sixties to encourage their daughters to take the pill, fearing it would lead to promiscuity and so young people often relied on ineffective condoms as their only means of birth control. Consequently, as birth control and ‘the pill’ were still taboo subjects, many young, white girls became pregnant to black fathers who then sadly then dumped them, I personally knew of several girls who had this happen. Of course there were notable and very happy exceptions to this rule many of whom have gone on to enjoy happy and faithful relationships.

It was only really the arrival and mainstream acceptance of artists like Eddie Grant, Bob Marley and performers like Jimmy Cliff and Desmond Dekkar who alongside white artists who performed ‘reggae’ style songs such as the Beatles, the Specials and UB40 that black youth eventually set free the reggae genre and moved on to other more exclusive and radical black music-styles like rap, hip-hop, gangsta etc.etc.

we called ourselves ‘the boss and scottie’

Notoriety and fame, inside a Consul convertible, they rode to light the fires of youth

I agree, this is as raw and basic as it gets. This piece was an experiment in poetry.

It’s about what I need and what I can get whilst I metamorphosize from a child into an adult. Poetry should not always be fine and pretty and honourable, sometimes it should be human, awkward and shitty. There is no one more disillusioned, freaked out, uncool than an adolescent youth. No one has more questions to ask than a young adult. No one is more ashamed of their humanity and its degradation. No one needs more understanding and care and love and support than the adolescent and sadly no other age of young people got less than we did in that time of perceived plenty after the war when apparently we had never had it so good and we should have thought ourselves lucky.

Don’t judge my poem because its not Wordsworth, Byron or Shelley. Understand its honesty, naiveté, its simplicity, its youthful sway and you may discover it is charming.

Therefore, despite it’s sharp rough edges and lack of discernment and taste I’m leaving this poem here on my page as one of my ‘That’s Me In The Middle’ Series of Poems.

I'm a writer ... I write .. . I’m not sure why I ever stopped, was it 9/11? .. . edenbray is born ugly, wet and covered in blood, mucous and bodily functions ~ the effluence of my short life .. . I am a Writer and Artist since 1966 - I'm an avid Blogger ~ I write lots of poems, written essays, articles, reviews, opinion + comment .. . I have had many poems selected for Anthologies of verse and recently have published many of my poems in 24+ themed booklets ... please ask for details - join the shebang by leaving me a marker with a 'like' or a comment for my ego and encouragement and thanks for listening - I really value your interest ~ edenbray
View all posts by edenbray →
This entry was posted in edenbray APPRECIATION, edenbray COMMENT, edenbray OPINION, edenbray POMES, THAT'S ME IN THE MIDDLE and tagged CHEAM, PEANUTS, REGGAE, SIXTIES CULTURE, SKINHEADS, SUEDEHEADS, SURREY, SUTTON, THE CROYDON SUITE, WEST CROYDON. Bookmark the permalink.